I recently upgraded my PC and I chose an ASUS M5A97 EVO R2.0 motherboard, an AMD FX8350 and some Crucial Ballistix RAM. To keep the CPU cool I also purchased a CoolerMaster Hyper T4 air cooler. This turned out to be a mistake as the heat-sink and fan clashed with the RAM. So I looked for a replacement as the AMD stock fan was struggling to keep the system cool on warm days.

The T4 had seemed like a good choice as it was specific to the AMD socket my motherboard had and fitting it was going to be quick and easy. This would have worked out ok but it clashed with the raised metalwork on the RAM modules. The T4 can only be mounted in one orientation so I had no other option than to fit the stock cooler that came with the CPU to get the system running. This worked fine initially but once the weather got hotter the fan struggled. The PC worked but the popup +65 degree warnings in Windows worried me slightly. Eventually I ordered a CoolerMaster Hyper 212 Evo heatsink and fan. It looks and feels very similar but comes with multiple mounting options for both AMD and Intel CPU sockets and can also be mounted in different orientations. The only downside is that you have to remove the existing plastic brackets from the motherboard and fit a replacement metal bracket. The 212 then bolts onto this new bracket. It meant I had to remove the motherboard from the case but fitting the cooler was easy. As you can see from the photos the whole thing fits nicely and clears the RAM.

Although it means I’ve got a brand new T4 sitting in the garage I’m happier now that my PC is quieter and I don’t have to leave the window open in my study in a desperate attempt to lower the temperature.

I’m not one for spending time logging CPU temperatures so I’ve got no fancy graphs to show. I don’t get any 65 degree warnings and that’s good enough for me!

Overall I think the CoolerMaster Hyper 212 Evo is a fair price a product that does exactly what you need it to do. The only other thing to watch out for is the height. It is quite tall and I only have 10mm between the copper tip and the side of my case.

Checkout the official specifications on the CoolerMaster product page. 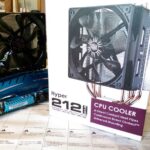 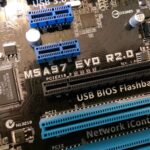 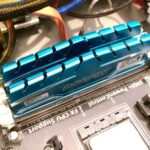 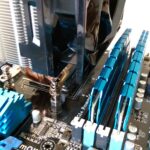 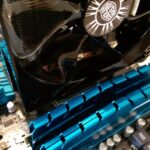 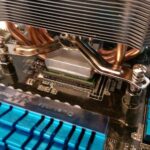 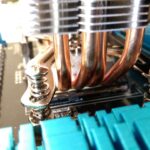 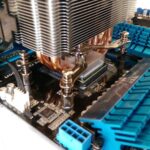 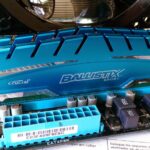